In many Asian American communities, young people feel great pressure to succeed and to uphold a “model minority” narrative. erin Khuê Ninh, an associate professor in the UC Santa Barbara’s Asian American Studies department, recently published a major scholarly article exploring this widespread phenomenon.
Ninh’s monograph, Passing for Perfect: College Imposters and Other Model Minorities, examines the life of Azia Kim, who posed as a student at Stanford University despite never having been admitted, and Jennifer Pan, who hired hitmen to kill her parents before they found out that she lied about attending college and pharmacology school.
In a recent interview, Ninh talked about the process behind writing the monograph as well as her interpretations of Kim and Pan’s experiences, including what they reveal about the model minority life and the pressure to succeed. 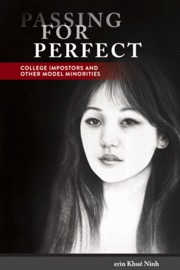 Q: Why did you choose to write a story specifically about college imposters?
A: I don’t know if I decided to. But I had heard of the Azia Kim story back when it happened [in 2007] and I heard about the Jennifer Pan story several years later, and they both just kind of existed in parts of my brain. In the meantime, I looked around for a book topic. At some point, I came across a couple more of these instances and they made a pattern. It was apparent to me that inside the pattern were all the issues that are the nearest and dearest to my research life. So once those pieces clicked into place, it’s like the book just had to happen.
Q: What do Kim and Pan’s experiences as ‘imposters’ reveal about the pressures of living with the model minority myth?
A: The reason I chose these types of stories, in particular, was because of how irrational their choices seemed and how very desperate their choices seemed. That, to me, cried out for explanation. Because, otherwise, model minority life is so normalized. It seems obvious everyone should go to college, study hard, get good grades, aim for the Ivies [Ivy League colleges] or at least the UCs. And it seems because of the mind meld in many of our immigrant communities, it’s obvious that the best thing to be is a doctor or lawyer. Anything else is less. So, if it seems so normal and we all tend to agree on this, to the degree that social scientists have found that we agree on it, then how can something so agreed-upon lead to these kinds of self-destructive and homicidal actions?
Q: Would you say Pan’s action of hiring hitmen to kill her own family shows she was more focused on success at any price than on pleasing her family and repaying them for their sacrifices?
A: I mean she had been trying very hard to pay back the sacrifice. The thing is that the payback is not just in money, but in prestige. So, the appearance of a successful family is part of paying back with prestige.
What I argue at the end of her chapter is that even that horrific decision to kill her parents was motivated by the desire to preserve for them their sense of themselves and their family, and of her, that they had been so insistent on. Her parents could not be flexible, could not find flexibility in their vision of what was acceptable for their family. The murders were a way for them to die within the illusion instead of waking up outside the illusion.
Q: Can you walk us through the writing process for this book? Were there any difficulties?
A: The research process was challenging in new ways for me because I had to track down people. I had to track down materials and archives. It was a different way of researching for me because as a literary scholar, I’ve been really used to working with things that are readily available, already published. So, on the research end, it was kind of fun but also incredibly frustrating.
On the writing side, it was really straightforward. Painstaking, though. I had to write with extreme care because for the first time I was writing about real people, who hadn’t necessarily agreed to be written about. I had to imagine how it would be for them, how it would be for their friends and families and tried not to do any harm to them. It was incredibly painstaking but also straightforward in the sense that I felt like I knew when it felt right and I knew when it felt wrong.
Q: Is there any advice you would give to someone who might be experiencing some form of the same pressure to succeed as Kim and Pan did?
A: I hope that they are able to find the resources to discover that the parameters within which they live their lives are artificial.
Priti Sharma is a second-year Economics and Communication major at UC Santa Barbara. She wrote this article for her Writing Program class, Digital Journalism.